So I took the day off of work so that I could be there bright and early. I dropped my wife off at work so that I could have the car. But when I got to the store I found out that the new 3G iPads would not be going on sale until 5pm later that day! They were closing up the store an hour before the event to get ready. Pooh!

I decided to get all the accessories that I wanted for my new iPad right then and there and come back to purchase said device.

Getting the iPad
Well I got to the store there was a line of people snaking around patiently waiting for their turn to get their new Apple toy. Quite a few people there. This wasn’t an Apple store in California, New York, or even a store like the one on Michigan Avenue in downtown Chicago, this was in a mall in Oak brook, Illinois. Must be all the geeks! Well… I’m one of them! Another view of the line waiting at the Apple Oakbrook store. 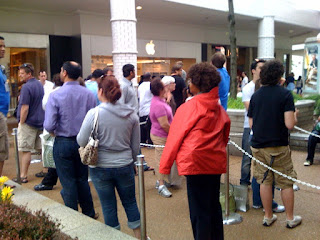 I took this picture near the end of the line where I wait for my chance to own an iPad 3G.

When the store opened and the first few people were picked to enter the store, the Apple employees cheered and applauded. I’m glad they just did this at the start or I would have been embarrassed. As Apple employees would become available they would come out of the store and get the next customer in line. Overall the buying experience was very good and the line moved along nicely. They were out of the low-end 16 Gb 3G models before I got to the front of the line!

And what did I get? The 64gig 3G model (which was what I had decided to get all along).