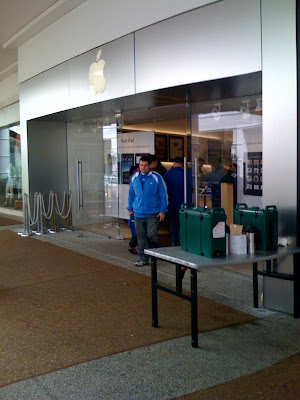 Today, was the day that Apple fans have been waiting for. The day the iPad finally went on sale. I went to Bally’s to workout and then decided to head over to the nearest Apple store. My intentions were not to buy an iPad but merely see what was up, and try one out for myself. My plans were to buy the 3G version that is supposed to come out later this month.

I knew there would be lines at Apple stores in places like Palo Alto, San Francisco, and New York. I did not think there would be such a thing really at the store in Oak Brook, Illinois.
I got to the store around 1-1:30-ish in the afternoon. And the scene I saw is shown in the picture above.

The lines were gone by now, but I asked someone working at the store about them, and there was a fairly long line waiting outside, ready for the Apple store to open its doors. Even at the time I shot this picture with my iPhone the doors were propped wide open and people were spilling out of the store (its a little hard to see in this photo). And most of the people were towards the front (where the demo iPads were on display). All the Apple staff for the store were out in full force, and, even with all the people who showed up, there were plenty of staff members there to serve you and answer your questions.

The place had a festive atmosphere and I started getting strong urges to buy a Wifi only iPad right there on the spot!

At the tables where the tethered iPad demo units were on display, you actually had to stand in an impromptu line to get a chance to use one. I took the picture below as I was waiting to get my chance. I heard from one lady who worked there that there had been a customer who had hogged using one for nearly an hour! Fortunately for me, everyone I saw was polite and civil!

They look so thin! I was surprised that when I actually picked one up, it was heavier than it looked. But its still cool! 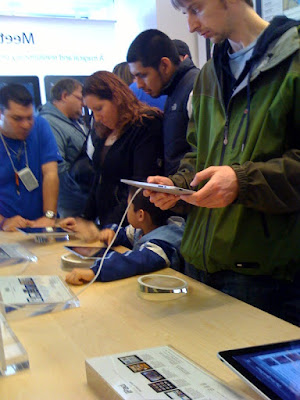 People Giving the iPad a Try

At the back of the store, behind the counter, they had iPad boxes stacked up in stack upon stack. Though most of them looked like they were reserved for people who pre-ordered.

No docking devices with or without keyboards were to be seen, but that was not surprising considering information on the web said they would come out later. What was surprising (at least to me) is that there were covers on sales for the iPad. These were supposed to be delayed too. But, at least in this store, they had plenty available. Below is a rather blurry picture I took of the covers for sales hanging on a display on the wall: 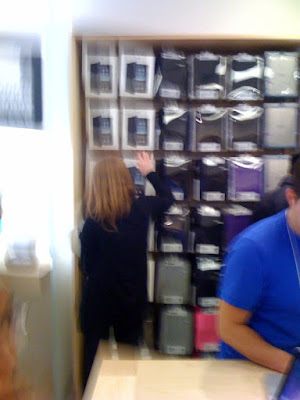 Blurry shot of iPad covers that are on sale

I came really close to buying one, but I walked out of the store escaping the energetic atmosphere of iPad seduction that permeated the place. Does that mean I’m not getting one?
Nope! I’m waiting… at least for now!